It really doesn't get much better than this. Bee eaters are almost untwitchable and are often only seen as fly-bys or even heard only. Last week on Thursday and Friday we (me and Shaun - see www.valleybirding.blogspot.com) contemplated after work twitches to Dungeness, Kent (1. 5 hrs) and Cley, Norfolk (2.5 hrs) for Bee eaters but decided against it when news informed us that they had flown.

So this morning with news of another bird up in Norfolk, this time at Glandford, we decided that it was worth a punt. At 10.30am we set off and the next 120 miles and 2.5 hrs in the car was excruciating as Paul kept texting us that the bird was still present showing well on overhead wires. The weather was good being overcast and damp as we parked us 1pm. Another text stated the bird was still present 5 minutes earlier. We literally ran the 300+ yards to where a group of birders could be seen. Out of puff (carrying camera, scope and bins) we arrived to be told the dreaded news - "the bird flew off east literally 10 seconds ago". Noooooooo!

Catching our breath we thought about going back to the car to visit the site the bird had been seen at earlier, but being less than a mile away, we decided to walk. That was a good call, as  the bird had relocated on wires just 200+ yards down the lane. Whoohoo! 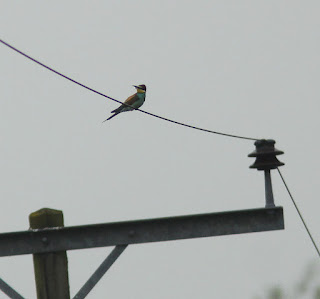 The bird provided great scope views for 30 minutes or so. Shaun and I literally high fived as we were so pleased to have successfully twitched such a stunning and difficult bird. 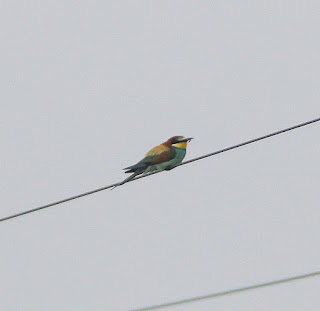 Just up the road at Warham Greens a Red Breasted Flycatcher had been found so we headed there to find it mobbed with up to 100 birders. Apparently the bird was playing hard to get and many, in fact, most had not seen it. Luckily, it was to be our day and after a short walk up the lane, we found it! It showed very briefly but ok for just a few seconds before diving for cover again.

What a great day! It doesn't much bee-eater than that!
Posted by Martin Blow (martin.blow@rocketmail.com) at 10:46