Dusly Warbler is officially no longer my bogey bird! After 3 previous dips I managed to catch up with the Walthamstow Resevoir bird first thing this morning. I picked up Shaun bright and early at 6am, arriving at the Fisherman's car park 30 minutes later. We had to wait 20 minutes for the gate to open before parking up and heading over the road to the resevoir, joined by Steve Bacon, who we bumped into in the car park.
We walked the mile or so to the bird's favoured area and was surprised to find we were the first on site. Being a 1st for London we thought there would be a big crowd but I guess many people had managed to catch up with the bird during the week.
Within a few minutes we had located a couple of warblers feeding in brambles along side the canal about 100 yards. One was definitely a Chiffy, olive coloured in appearance, the other was much paler, this had to be it, if only we could get enough on it to be sure. We watched the bird for about 20 minutes, skulking in brambles and feeding along the top of the canal wall until eventually it sat out for a few seconds providing slightly better views, that was it! By now there was probably a dozen or so birders but most could not get on to it being a good 100 yards plus away. The bird then flew across the canal and began feeding in the sunshine along the fence line. We moved round to position ourselves opposite the bird then enjoyed great clear views from as close as 30 feet as the bird moved along the fence line most of the time feeding out in the open. Happy with Dusky Warbler on the list (life list 364) we moved on, via the Slavonion Grebe on the reservoir. 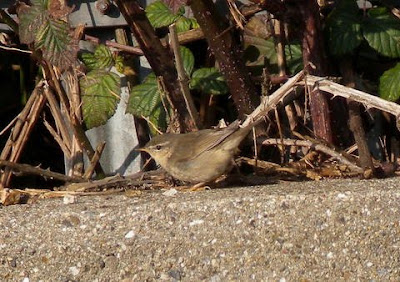 Picture by Priscille Preston - thanks!

We headed to the Girling Reservoir just up the road where we counted double figure Black Necked Grebes, Great Northern Diver and Goldeneye, but despite Shaun and Steve trying to string some shabby looking Great Cresteds we could not locate the reported Red Necked Grebe.
Via a McDonalds breakfast we headed up the A10 to Broxbourne to try for Hawfinch that had been reported earlier this morning and the previous day. A muddy 45 mins later we left Hawfinchless, to head home.
It's great to get a lifer locally, let's hope there's more to come in 2010.
Posted by Martin Blow (martin.blow@rocketmail.com) at 05:18 No comments:

Wednesday saw me dip Dusky Warbler for the third time. Having dipped the (F)LBJ in Cornwall 2007 and in Norfolk in 2008, this time I managed to dip much closer to home, in Walthamstow, East London. Just half an hour from my work place in Stratford I managed to get out of the orifice early at 3pm with my colleague/mate Pete, a non birder, who fancied coming along for the trip, and who luckily for me drives to work.

30ish minutes later we were parking up on Black Horse Lane and heading along the canal toward the north east corner. It was only at this point that I realised that I would have to undertake some kind of army assault course procedure to get across the canal! Poor old Pete couldn't manage it and opted for sitting in the late afternoon sunshine while I headed over the edge of the reseviour to view into a fenced compound. I was met by the usual, “it was showing well about 2 minutes ago mate, it’s probably doing a circuit and will be back again”. Yeh right.

I spent the next 1.5 hours with my bins glued to my eyes, unlike most of the others who were chatting and generally not looking for the bird at all. About an hour in, I thought I had it. I called it but before anyone with a scope could get on it, it flew 10 metres and buried itself into a bush, and didn’t reappear. I can’t tick that, although I think there is a good chance it was it.

Birdguides has been reporting the bird showing well, each day since so I’ll be heading back first thing tomorrow morning (Sat) with Shaun, who also dipped out earlier on Wednesday, no doubt with many others desperate to add Dusky Warbler to their London list. Watch this space!
Posted by Martin Blow (martin.blow@rocketmail.com) at 04:05 No comments:

Another Green Winged Teal Stripe Up for Hawky 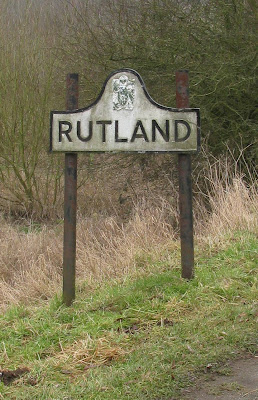 Sunday saw me and Hawky up in Leicestershire/Rutland for the day. We met Bagsy (Hawky's Dad) in the car park at Rutland Water about 8am before heading off along the muddy trail to where up to 3 Long Eared Owls have been roosting for some time now. 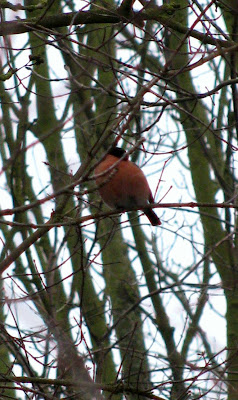 On route we encountered some showy Tree Sparrows at the feeding station and a 3 Bullfinches in the wood as the path begins. 3 Goosander were just about the only birds on show from the hide we stopped off at, before we arrived at the owl roost. Through the dense thicket we could just about see 2 Long Eared Owls, obscured by branches and brambles. 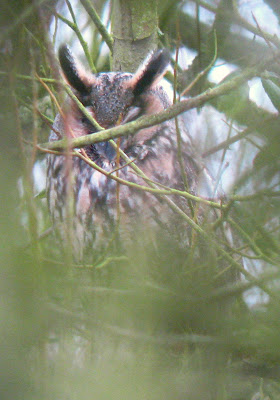 Heading back a flock of 20+ Lesser Redpolls were seen in flight and a probable Hawfinch, only seen taking off and flying away from us caused quite a bit of debate on the bird's ID.
Back at the car park we headed to Eyebrook to try and find Hawky's bogey bird, Green Winged Teal. Hawky has been particularly unlucky with this species, having eluded him on an estimated 20 twitches. We spent the next 2 to 3 hours checking out what seemed every bloody Teal. Along the way we found 3 Smew (2 drakes) and 2 White Fronted Geese, and a Red Kite, but yet again for Hawky, no Green Winged Teal. 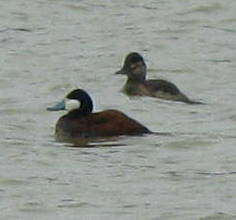 Not as Ruddy common as they once were! 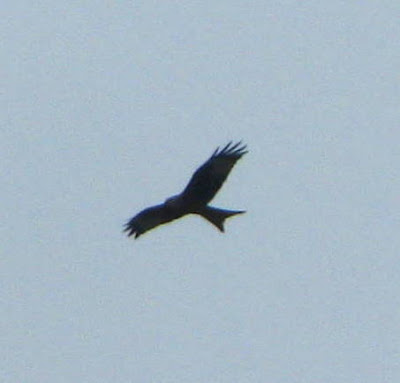 but Red Kites are getting more common by the minute!
Posted by Martin Blow (martin.blow@rocketmail.com) at 09:48 No comments: