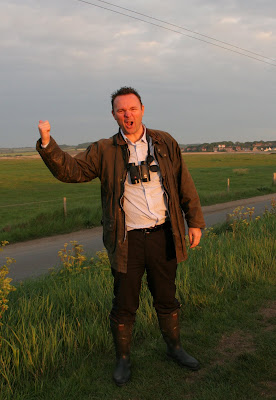 News that reformed (er, hem) dirty twitcher, Jono Lethbridge and Shaun the lepidopterist, were heading up to norf naarfak for a smart male Trumpeter Finch mid afternoon yesterday had me making plans to leave work early at 3pm and make my way over to Jono's place for a 4pm off. Having already seen Trumpeter Finch some 2 years earlier at Blakeney Point (on exactly the same date), it was actually quite nice not having the stress of "needing" the tick. News that there was also an adult male Red Backed Shrike, a Marsh Warbler and then later an elusive Thrush Nightingale, all within 5 minutes of each other, did however get the juices flowing.
Suited and booted, I was not exactly dressed for a hike along the shingle east bank at Cley, but just like Mr Benn, I went into the changing room (Jono's house) and viola, I came out looking a prize prat, trousers tucked into wellies and a well used wax jacket.

Jono kindly lent me some bins as going straight from work I had no scope, camera or bins to hand. Master Henry; Jono's bird obsessed young son, joined us as it is half term for the long journey north with the lads. We met Shaun on route along the M11 and we were off. On route I manage to year list Little Owl and Shaun spotted a Stone Curlew at Lakenheath. 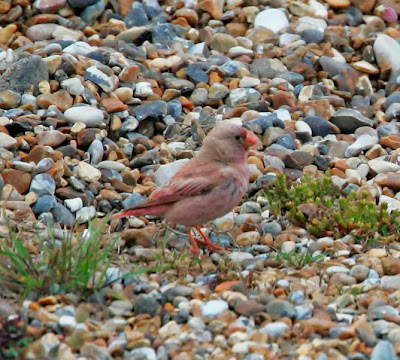 Arriving around 7pm we made our way to where a small group of birders could be seen in the distance to see the very smart Trumpeter Finch. It treated us to good views on the deck and on the fence wires. It was now approaching 8pm so decisions had to be made. Shaun needed Thrush Nightingale so naturally he joined the crowd hoping to see or at least hear the elusive bird, but it was not to be. Jono, Henry and I travelled the short distance to where the Red Backed Shrike had been reported and we were not to be disappointed. It showed really well down to 30 yards or so and I really regretted not having my scope and camera as I would have been able to get some cracking digiscoped shots. You just can't knock a shrike, no matter which species, they are all smart and I never tire of seeing them. Can I have an Isabaline next please! 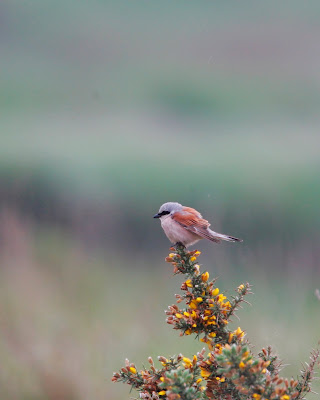 With the light starting to go and hunger starting to take its toll we decided to not to stand around starring at an empty bush but go and find some fish and chips instead. As it happened, an open chip shop at 9pm on the north Norfolk coast is about as elusive as a Thrush Nighingale (wearing a false moustache and carrying a fake passport). After a tour of Sherringham we headed empty handed (and bellied) to Cromer where we eventually found a chip shop open. And that was that, 2.5 hours later I arrived home, very tired, but very happy with a great evening out with the lads seeing some top birds.
Thanks to Jono for the bird pics!
Posted by Martin Blow (martin.blow@rocketmail.com) at 04:24