Yesterday was my Dad's 80th birthday! We had celebrations planned for Friday at my house and 17 of us were going away Saturday night. Twitching was not not high on the agenda. It was only when we got home after lunch time on Sunday (yesterday) that I checked Birdguides for the first time over the weekend and discovered that what is possibly my most sought after bird, a Terek Sandpiper, was at Church Norton.

It was 2pm by the time I decided to go for it. Shaun was up for it and he needed the Hudsonian Whimbrel too that was still on site although acting a lot more elusively as time has gone on.

The journey was good and the bird was playing ball, that was until we checked Birdguides when we were just 20 minutes away to read the dreaded "No further sign" message. Sure enough on arrival we were told it had not been seen for an hour, but the Whimbrel had been seen around half a mile along the coast. We headed off for that, found a small group of birders who had seen it, but it was currently out of view in long grass. After 15 minutes of staring at movement in long grass, I checked Birdguides. The Terek was back! Shaun stayed to look for the Whimbrel and I speed marched back to where I had been standing just 20 minutes earlier.

Our chances looked even bleaker when I got back to be told I had missed it again as it had just flown out of view. Noooooo. I called Shaun, who had still not seen the Hudbrel and told him to stay there. I was now really up against the clock. It was Father's Day and we had a meal planned for 8pm!! I must leave by 5.45pm. I have thirty minutes max. ten minutes passed, nothing. Then, boom! The shout goes up that it's just flown in onto the shingle bank in front of us (80 yards away). What a cracker! I immediately called Shaun and as it rang a text arrived from him, he'd seen the Hudbrel. It was all falling into place. I enjoyed excellent scope views of the smart little wader, as did Shaun when he mad it back after 15 minutes or so. We really were jammy. It could have easily been very different with neither bird seen. I wonder what will turn up next at Church Norton? A Stilt Sandpiper would be nice.

Again no photography prizes to be won here! 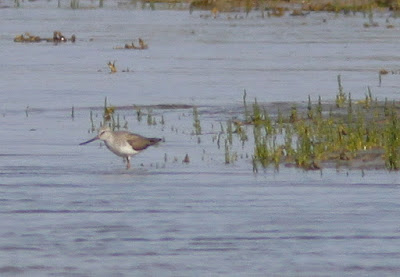 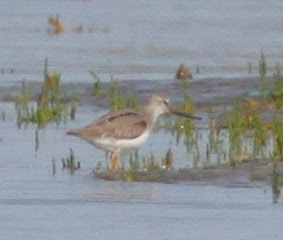 Posted by Martin Blow (martin.blow@rocketmail.com) at 09:22