Yorkshire and in particular East Yorkshire has been very hit and miss for me in terms of connecting with rare birds. A round trip from Essex/east London is a good 9 hours in the car and well over 400 miles so a twitch that far north has to carefully considered. In facr my first three twitches to East Yorks, all, yes ALL/100%, ended in dips. Pechora Pipt, Brown Shrike and Brown Flycatcher all ended in disappointment,  but at least I have seen a Brown Shrike (London) and Pechora Pipit (Unst, Shetland) since. My last two adventures to East Yorks have actually been very successful with a memorable twitch for Ivory Gull and just a few months ago, Masked Shrike, so when a Little Bustard showed up on New Year's Eve I was up for another long trip north.

My partner in crime on this occasion was Lee Brown. I could go on 1st Jan but had plans to see the New Year in with my family and close friends Jack Daniels and Stella, and anyway, I doubted it would still be there the next day, so it was decided, if it was still there at dusk on 1st Jan we'd be there for first light on the 2nd. I was toying with going on news but that is equally risky with limited day light hours at this time of year and it being a pig of a journey when jo public have gotten out of bed and are on their way to some shopping mall or other.

The added bonus of the trip was in the form of a mega eare Blyth's Pipit 90 minutes from the Bustard site in West Yorkshire. Easy, tick the Bustard by 9am, see the Pipit by midday and be on the way home by early afternoon.

Lee picked me up at 4am. I think I had about 30 minutes sleep so felt terrible, not helped by a cold that had been passed to me by my Mrs. Four and a half hours later via a trip the wrong way over the Humber Bridge we arrived on site. Already in position around 100 very cold birders. It didn't look good. Scopes scanned the field the bird was last seen in from all angles.  If it was there surely it would be obvious.  A very cold hour later it was obvious.  The bird was gone, dead, who knows. Bollocks.

We headed to the pipit site for a consolation prize. The Blyth's Pipit is very rare. I have seen one previously on Scilly in 2008 I think. The bird was supposed to be easy. Roll up, see bird, take some pictures and go home. On arrival we were told it had not been seen for a while since it flew to cover.  We set about refinding it. Checked various sites from various angles. No good. 90 minutes later we'd had enough.  Walking back to the car the group of birders huddled by the KFC appeared to actually be looking at something.  They were. The pipit was showing. We got in place and waited and there it was, standing proud in the wispy grass. Lee was not able to see it so I quickly called for him to move to where I was positioned. Out it popped again and showed well briefly. Thank bleep for that.

And that was that.  worth a mention is a nice a touch made by the KFC staff who provided free hot chocolate to the freezing birders, which went down well.

And finally,  as the day wore on I heard rumours from a few people that the farmer who owned the field that the Bustard had been in had deliberately flushed the bird after dark after poor behaviour from a small minority of birders on site the previous day, including blocking the  entrance to his farm with inconsiderate parking and then his wife being verbally abused when she asked for the car/s to be moved. Who knows if this is true. If it is I just wish he'd told people he was going to do it to save me a long journey and another East Yorkshire dip. 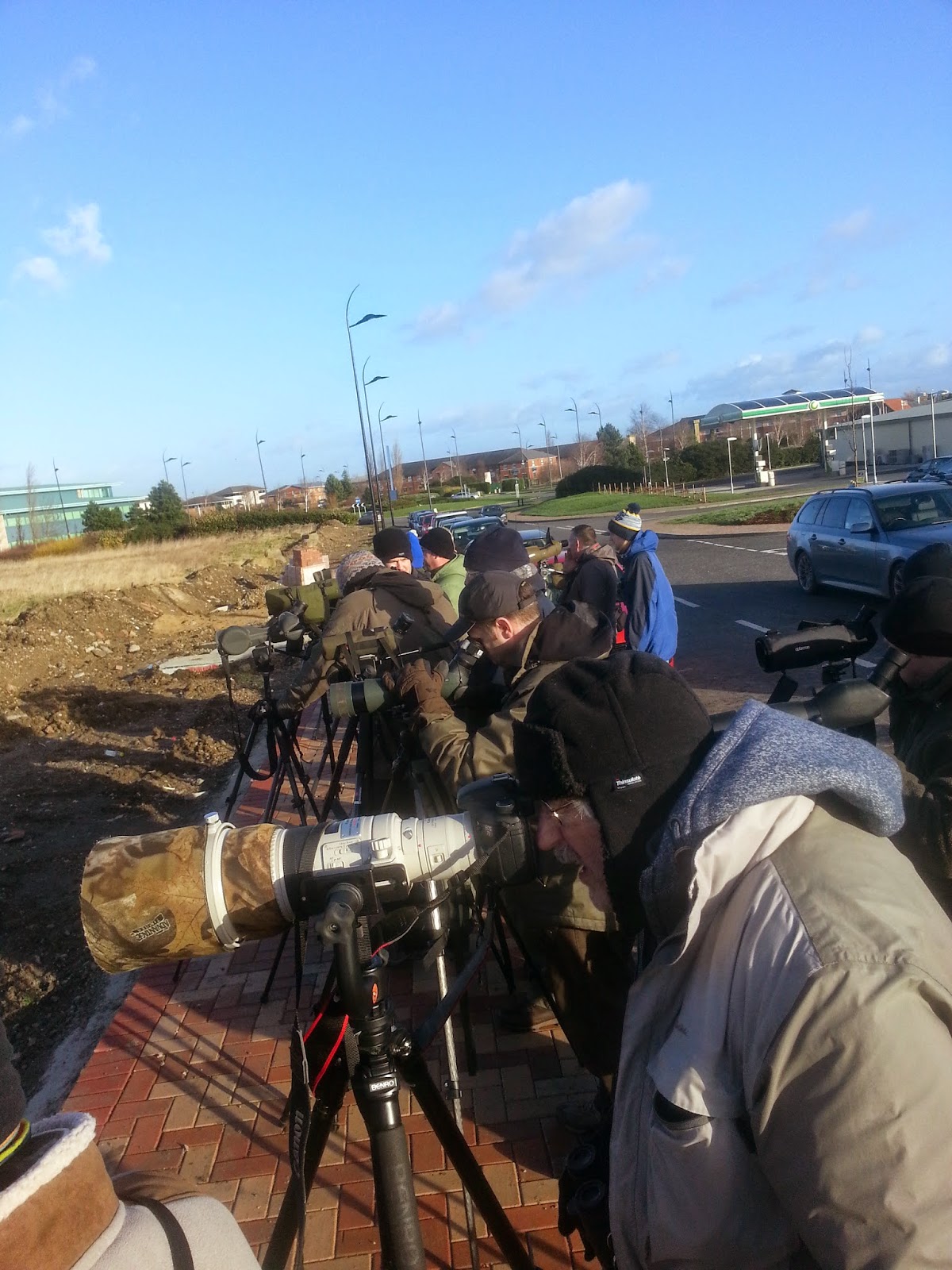 Crowd at the Blyth's Pipit Site 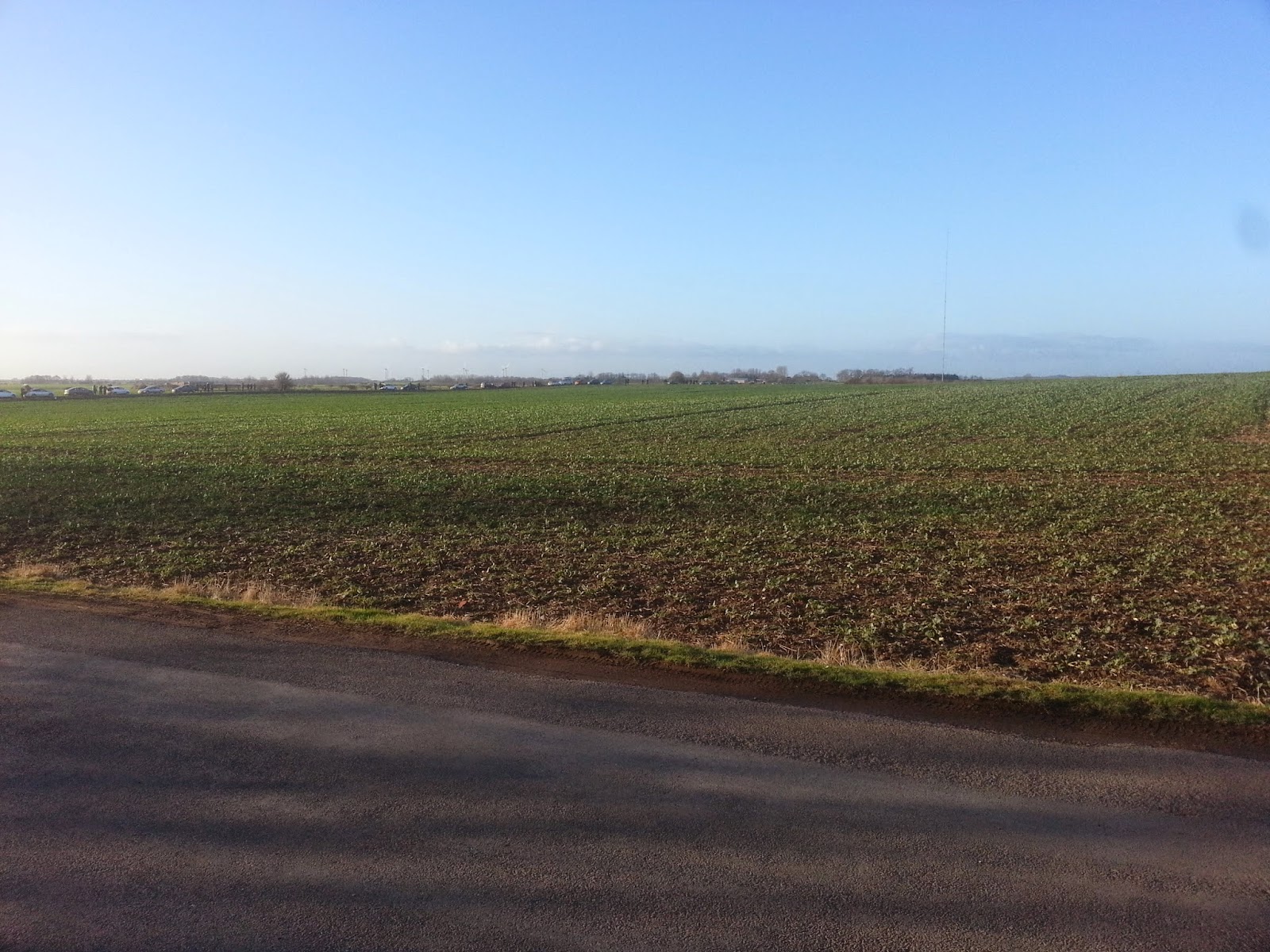 A Bustard free zone
Posted by Martin Blow (martin.blow@rocketmail.com) at 09:29