With just 6 days to go until the Opening Ceremony of London 2012, things are really starting to heat up in and around  east London. My office is just a few hundred yards up the road from the Excel Centre, where many Olympic events will take place, and I can see the Olympic stadium and the Dome from my office window.

The new cable car that crosses the Thames from north Greenwich to Custom House is now open, and being just 5 mins and 2 stops on the Docklands Light Railway from my office I took a ride in the week.   ﻿ 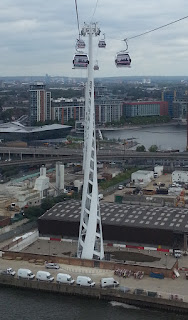 In Stratford itself Olympic fever is really starting to grip. I luckily have managed to get tickets for a few events and went to pick them up on Thursday evening from the ticket office. 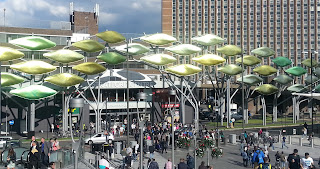 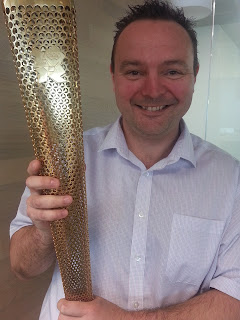 Most exciting of all was that I was lucky to be able to hold an Olympic torch yesterday. Someone who works in my office ran a leg of the torch relay and brought in the torch for everyone to see.

This is not a great photo but you will see my office with 2 huge cruise liners moored up along side to provide accommodation for some of the thousands of people shipped in (boom boom) to work on the Olympics. Rumour has it that the FBI is housed up in one, as the ships are next to the UEL (University of East London) campus, where the USA Olympic team is based. 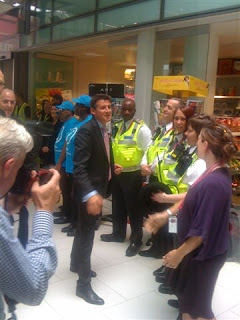 Finally to wrap an exciting few days, Seb Coe, one time Olympic gold medalist and now Olympic Ambassador, paid a visit to our office building to meet some of the staff who will be working 24/7 during the games to help keep the area running i.e. bin collections, street cleansing etc
﻿
Posted by Martin Blow (martin.blow@rocketmail.com) at 06:49