The January birding blues have been firmly banished and replaced with fab Feb birding! I really needed a good day out with a few of the lads on the trail of a rarity of two to re-initialise my enthusiasm, so the prospect of 2 life ticks in West Sussex and Sussex, was just what the birding doctor ordered.

With The birds just an hour apart, on Friday night we had to decide which bird to go for first. Both birds have on previous days been reported first thing, and until about 10am and then disappear. Based on that, and a combination of plummeting temperatures, snow forecast and that there had been no sign of the recently found Paddyfield Warbler the previous day, we thought getting both birds would be a tall order, so better than dip both we'd go for the one we thought would we'd have the best chance of getting. Perhaps the warbler was frozen to a tuft of grass by now! Therefore we ( Me, Jono, Nick and Bradder-jnr) decided to go for the Crossbill and play it by ear.

On route the temperature gauge in the car reached -7.5c, so I was pleased I had put my full thermal body suit on. Arriving on site around 2.5 hours later we made our way to the spot close to a now frozen pool where the Crossbills regularly first thing come to drink.

We joined a smallish group of around 20 birders and bagan looking and listening. Crossbills were in the area and could be heard and a regularly up to a dozen fly between the tree tops. Checking out every female, none looked like our target. Half an hour passed and we began to wonder whether our day out would mirror the British economy with a double dip on the cards. To rub salt into the wounds, pagers beeped to smugly tell us that the Paddyfield Warbler, was in fact not frozen solid but fit and showing well down at Pagham Harbour NT. The law of sod, crossed our minds, with much discussion along the lines of, whatever one we'd have gone for first we'd dip it and the other would sit up pouting for the birding paparazzi in attendance. Another 15 minutes passed and again the pager confirmed the so called elusive far eastern Warbler, was STILL performing well.

This time a larger flock of 30+ birds flew to the trees by the pool. One bird stood out distinctly from the rest, not only did it have a deeper less crossed bill, but it was generally much bigger and bulkier bird. When the flock flew it could be picked out on size in flight pretty easily. Tick! During the 90 minutes or so on site we also had a smart Woodlark, a few Siskin, Redpolls, calling Nuthatch and a fly by Great Spotted Woodpecker. 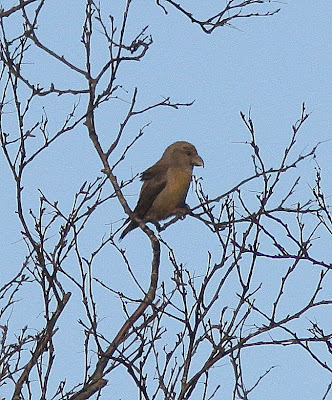 There had been no further news on the Paddyfield Warbler so we headed to Pagham Harbour happy with the Pirate loving Crossbill but not confident we'd also bag the rare warbler. We arrived about an hour later, after a stop for a much needed and much appreciated, bacon sarnie and a coffee at a roadside van.

At Pagham we were advised that the bird had not been seen for a couple of hours after it was flushed out into the reed bed by a photographer. Never! Now there's a shock. 5+ Water Rails kept us occupied running over the frozen water in front of us, while we waited, and searched the reed bed. There were probably 40 or so birders on site in 2 main groups. To be honest we'd almost written off our chances when we detected a buzz coming from the other group 50 or so yards further up the path. They had seen IT, well seen something, about 250 yards away. They were pretty convinced it was the bird. They described a pale bird with a darker cap, in the grass below the reed bed. Now there were 30 telescopes scanning the area, looking for movement, trying to relocate whatever it was. Some of those who had seen it were convinced it was the Paddyfield, but then again most on site were convinced a Greenshank was a Greater Yellowlegs, eh Jono! 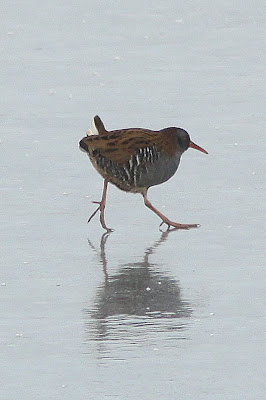 More movement was detected much closer to us, probably 75 yards away, just the other side of the water. Then "That's it!" shouted Bradders. The bird was scrabbling (is that a word?) around in the grass at the bottom of 3 bushes, allowing directions easier i.e. "it's on the ground in the darker green grass at 7 o clock from the middle bush etc". The bird then showed for about 15 minutes, occasionally right out in the open. Tick 2. It was smiles all around as we really hadn't expected to this tricky bird.

With snow on its way and Jono wanting to be home by 4.15pm, we quickly tried and dipped near by Great White and Cattle Egrets. Who cares! Before heading home. Birding enthusiasm now fully in tact I went straight to a now frozen Berwick Ponds to see if I could find the Bittern that had been reported a couple of days earlier. Alas no joy, but I enjoyed looking. 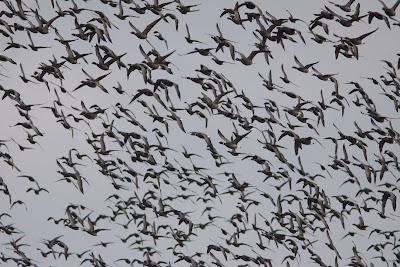 I spy with my little eye something beginning with B.
Posted by Martin Blow (martin.blow@rocketmail.com) at 01:56