How many firsts for Britain have you seen? I am pretty sure I have only seen one, Pacific Diver, in Yorkshire in 2007. Well maybe, I have no seen my second.

This Tuesday, 22nd September, I had taken my telescope, bins and camera to work as I planned a quick visit to Vange Marsh after work to go see a Wilson's Phalarope. I have only see one previously so one 30 minutes up the road was a must.

At work I cam out of a meeting around 11am to find numerous missed calls, texts and whatsapp messages. An Empid Flycatcher had been found at Dungeness in Kent and is do-able at around 1.5 hours from my work.

I guess 99% of birders at this point would have been thinking it was probably an Alder Flycatcher. There had been 2 Empids in Britain in the last 7 years and both had been Alders. I had seen the 2nd on Blackeney Point in Norfolk. My boss is very understanding of my passion for birding and twitching and said I could go right after our afternoon Finance meeting at 3pm. By 1pm I had a car full with city workers Bradders and Jono catching a train to meet me and Dan Barrett arranging to meet us on route.

The messages soon started to say, "Empid still, thought not to be an Alder", this was getting interesting. At 3pm we were on the road and by 4.50pm we were on site, along with a good 250 birders, surrounding the garden where the bird had been tracked down to and had been showing well on and off in poor weather most of the afternoon. The garden was in fact the same one where I had seen my first (of two) Dark Eyed Juncos in Britain. It didn't take long for the bird to show and when it did it was not shy, sitting on benches, a bin, fences and a satellite dish.

With the wonders on modern technology even while we were on site, via Bird Forum and twitter, American birders who had studied the photos were commenting that they were pretty confident it was an Acadian Flycatcher. If so it would be Britain's first and only the 2nd for the Western Pal after a bird was found dead in Iceland many years ago.

So it is now time to wait and see what happens. I believe DNA was obtained so a definite outcome should be able to be found. Watch this space. 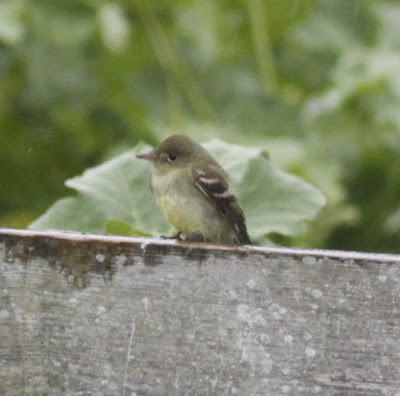 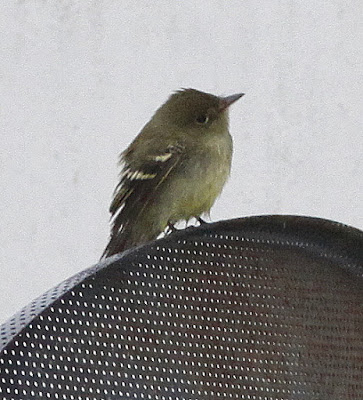 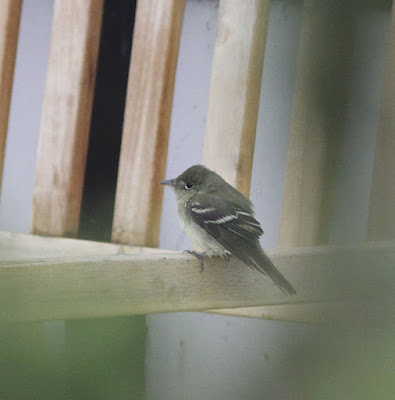 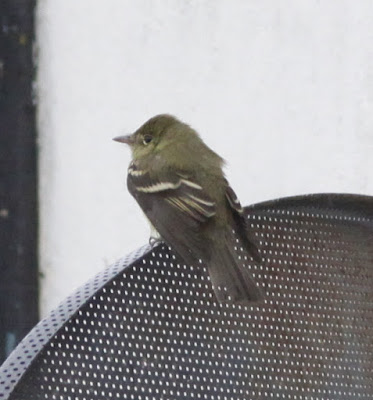 Posted by Martin Blow (martin.blow@rocketmail.com) at 14:32