Ivory Gull on my list, and my 400th BOU tick. Boom! However when we first arrived on site it looked like  it might all go badly wrong.

Me, Jono, Shaun and Nick set off on the 4 hours journey north bright and early, at around 4.30am. We planned to arrived just after first light to hopefully see the now long-ish staying Ivory Gull eating its pre-prepared breakfast of fish on the grass by the pumping station near Outsray Farm on the banks of the River Humber.

We arrived to find around 100 birders staring at a pile of dead fish, no Ivory Gull in site. Bugger. Each of the previous days of its stay, the bird had been present at first light feeding on the fish. This didn't look good. Half an hour later, still no sign and people started drifting off. Oh ye of little faith. Admittedly as an hour approached and still no sign we began to wonder if 2013 was going to end on a big fat dip. Then............

One of the crowd says, "the bird's been seen off Spurn, (c1.5 miles away) heading our way! With that everyone done a 180 degree turn and scanned into the distance for  white dot! Two minuets later, someone calls a white dot! Could it be? It get closer. It's very white! Closer and closer it gets. Now at about 3 - 400 yards. Yes that's it. Whoohoo! 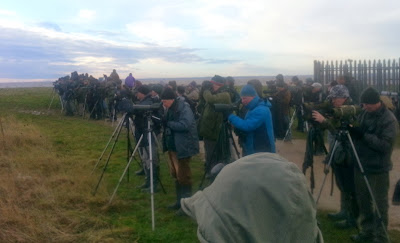 Scanning for the white dot on the horizon

The gull was heading straight for us and no doubt looking for some brunch. A few of us quickly moved to get a prime position on the grassy bank by the fish. Thirty seconds later, Bam! it appears from around the back of the pumping station and plonks itself down around 30 feet in front of us.       ﻿ 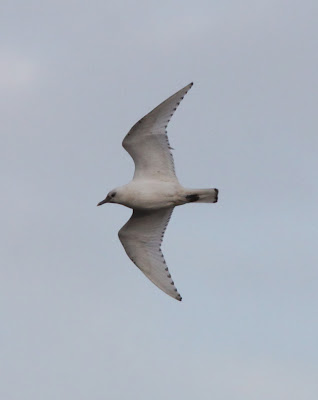 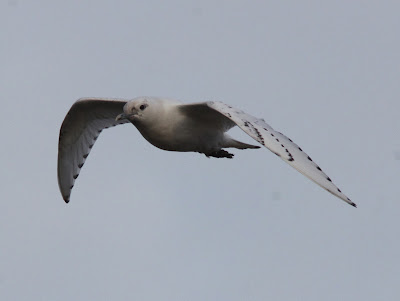 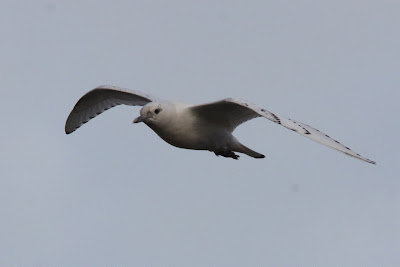 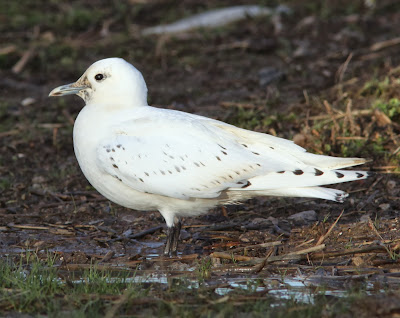 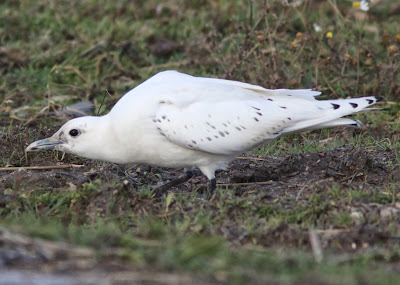 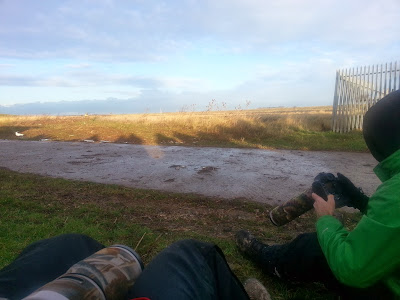 Shaun in green, checking is full framers with the gull to our left
We enjoyed cracking views of this mega rare gull for around 30 minutes, until it had had enough fish for one sitting and decided to head off for a while. Many high fives were had. Especially for me being my 400th BOU tick. I am so pleased this milestones was achieved with such a smart bird and exciting twitch.
On the way home we stopped off for a Velvet Scoter at Eyebrook Reservoir in Leicestershire, which provided the best view I have ever had of the species.     ﻿ 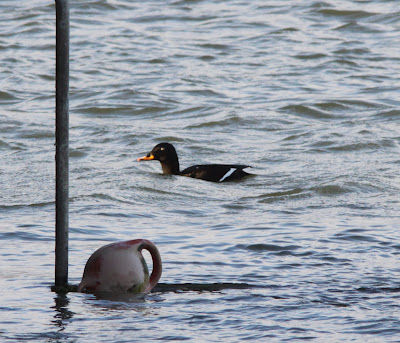 All in all what a brilliant way to round of the 2013 twitching calendar Merry Tickmas!.

Posted by Martin Blow (martin.blow@rocketmail.com) at 04:54