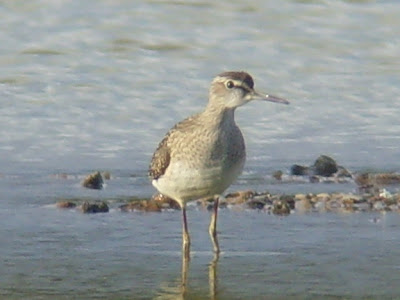 Picture by finder Vince HF - thanks!

Luckily last night I had about 50 minutes spare between getting home from work and going out for the evening. Just enough time to twitch the pair of Wood Sands at The Chase, as I call it. A 10 minute drive and 5 minute walk later I was at The Slack but initial scans failed to spot anything resembling Wood Sands. Moving location I spotted Vince crouching low digiscoping so moved into position. I still could not see them though until they walked out from behind some reeds closer than where I had been looking. They showed well for all of 5 minutes before all of a sudden they were up and and off and obviously not coming back as they disappeared into the distance. Hawky missed them 5 minutes. Back to the car and home, the whole twitch took about 50 minutes. Phew.
Posted by Martin Blow (martin.blow@rocketmail.com) at 06:12