Blast from the past - Oriental Pratincole Twitch 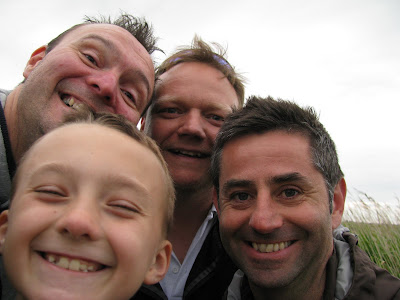 Me, Hawky, Jamie and Shaun

During the school summer holidays I had planned to take Jamie (9) out for the evening to look for his first Nightjar. We were to head to the Suffolk/Norfolk border with Hawky, Bradders Jnr and the Leth. Around lunch time however plans had to be hastily changed as the Oriental Pratincole originally found and ID’d as a Collared in West Sussex had re appeared at Dungeness, Kent. A few calls from Bradders Jnr to contacts were made to find a possible Nightjar site in Kent. By 5pm we were on the road. Shaun joined me, Jamie and Hawky in the monkey mobile for the one and half hour journey. Luckily the QE2 bridge was not too bad and the pager kept informing us the bird was still there. By 7pm we were ticking the Praticole and slapping each other on the back. Bradders Jnr and The Leth were not far behind. I tried throwing stones at it to scare it off before they could arrive but my aim was off that night.
Next we went in search of Nightjar. We had two in flight at dusk and as the light dimmed they could be heard all around us. We also had an albino Fallow Deer that freaked us out a bit at a distance but the highlight of the evening was hearing something running through the woods towards us getting louder and louder and it came closer and closer. There were a few squeaky bums as we all pretended not to be a little scared of the apparent mad wild killer two tonne bull that was approaching at 100mph. All of a sudden we realised it was not in fact a mad wild killer bull or an escaped lunatic from Broadmoor but in fact a badger. The night was rounded off with a glow worm and a calling Tawny Owl.
Posted by Martin Blow (martin.blow@rocketmail.com) at 12:01