We arrived at Porthgwarra car park around 1am. Luckily JL has a Ford Galaxy that with the seats folded away creates a decent sized sleeping space. Stuart had brought a small tent that he set up on the grass and by 1.30am JL was snoring away and I was lying there wondering what mega we would see tomorrow. I always get a bit excited the night before a birding trip and can't sleep and this was no exception. I managed about an hour and a half before the alarm woke us too early at 5.30am so we grabbed another hour before getting up and ready for a day's sea watching. By 6.45am we had carried all our gear for the day up to our viewing position, seats, food, kettle etc and were in position and were staring out at the expanse of the Atlantic Ocean. We had expected quite a crowd as the weather conditions looked promising but surprisingly there was only 1 person there.

The day started well with constant traffic of Sootys and Manxs. We didn't have to wait long for our first real excitement. Probably having been there less than an half an hour JL shouts "large shearwater!" But what was it? Well to be honest we are not 100% sure. Stuart having some experience of Cory's Shearwaters counts out Cory's. We decide it almost has to be a Great Shearwater (life tick 355) as it dwarfed the Manx is helpfully sheared past and was too dark for a Cory's.

The next four or so hours we were fed a constant procession of Manxs (150 ish), Sootys (30+) and Storm Petrels (35+) and a large Basking Shark feeding along the shore line below us was a life first for Stuart.

At about 10.30am experienced Cornwall sea watcher Martin Elliot joined us and we chatted about Black Browed Albatross's and what he thought our large shearwater was earlier from our description. He was pretty sure it sounded like a Great Shear too. The pleasant chit chat however all came to an abrupt end at just gone 11.20am:

ME (that's Martin Elliot not me) "Great Shearwater! Heading towards Runnel Stone from the left. Hang on, f*ck me, it's a Fea's! It's a f*cking Fea's Petrel! Is everyone on it? Fea's Petrel!"
(life tick 356)

Luckily we had all had our scopes trained on the very spot as we had been watching a steady stream of Storm Petrels in tha area. We had good continuous views for a couple of minutes as it slowly sheared over the ocean and eventually out of site.

After high fives were exchanged all round, calls and texts were made back to our birding buds back home so they could share in our good news! Well something like that 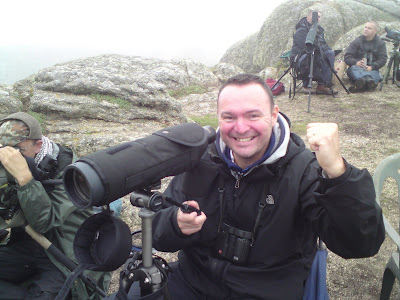 We were over the moon. All the effort to get there had paid off. Within 2 hours we were fog bound and sea watching was no longer an option. We twitched the Citrine Wagtail at Marazion which was just a 20 minute drive away. The bird had not been seen for a few hours so rather than stand there chatting we decided to go and look for it. This was almost a big mistake. We followed what we thought was a circular path which in fact took us further and further away from where we wanted to be. Eventually we climbed a stile and found ourselves on a main road a good 2 miles from where we had been. We started the long walk back when the pager bleeped to tell us "Citrine Wagtail showing well exactly where you had been standing, you idiots!" The pace quickened to by the time we got back to the entrance to the reserve we were jogging. Luckily we made it back and had very good views of the bird (life tick 357) for just a couple of minutes before it flew a short distance out of sight and I believe it was not seen again that day. Phew! 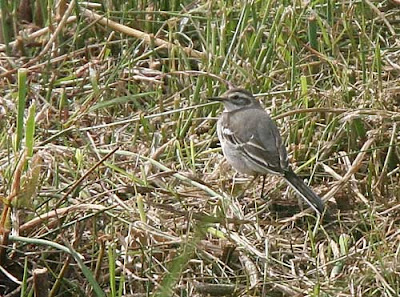 It was time to head home. The weather was now very poor. We stopped in Devon (Beer Head) for Wryneck, but we could not even find Beer Head let alone a Wryneck. Anyway who cares, I had 4 life ticks that I did not have 2 days ago and one of them was a Fea's Petrel! My target of a 360 life list by the end of 2009 now looks much more likely after such a cracking weekend.

Posted by Martin Blow (martin.blow@rocketmail.com) at 07:32