Cracking hour tonight at The Chase

I really am making an effort to work The Chase now. After Sophie's piano lesson I headed straight over arriving at 7.30pm. Vince was already there and before I caught up with him I could hear a Nightingale singing from the old Allotment area. Within seconds of meeting Vince the Grasshopper Warbler began reeling away 50 yards away. Initially it played hard to get, burying itself in deep cover. After 10 minutes though it flew right at us landing literally 6 feet away out in the open, shame it only stayed there for 5 seconds before flying onto another bramble 30 feet away. We had a couple of obscured views before it it buried itself in deeper cover and shut up. 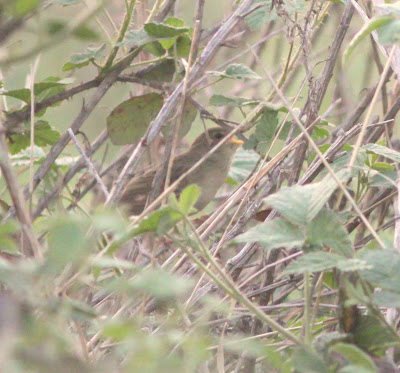 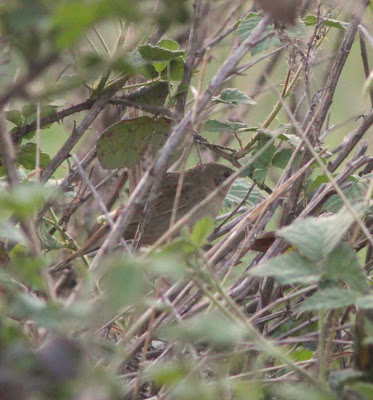 We moved further away and stood quietly hoping it would give itself up. We were not disappointed as 15 minutes later it perched out in the open reeling for at least 10 minutes. Unfortunately the light was not great by this time (8.10pm) so I only managed a few record shots. I should mention at this point all along a 2nd Nightingale was singing a couple of hundred yards away! 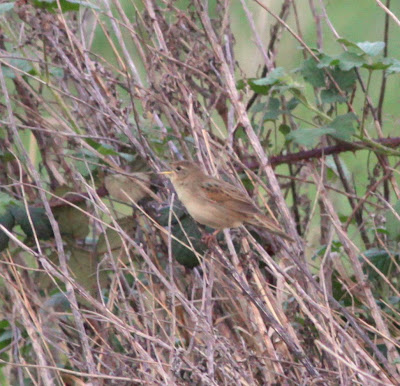 Finally on the way back to the car, a cuckoo called continuously making it 3 "patch" year ticks in an hour! I'll be back tomorrow am - looking for a Wood Sand on The Slack.
Posted by Martin Blow (martin.blow@rocketmail.com) at 13:03