All day Friday and Saturday the Greater Yellowlegs at Titchfield NNR (Hants) had typically been showing well when I couldn't go. So Sunday morning I was awaiting the news that it was still playing ball and was raring to go. By mid morning the inevitable message came though, "no sign", typical. Oh well back to the DIY. I just got out my tools, when, another message appeared " Greater Yellowlegs still"! I was quickly on the phone to Shaun and Hawky, looking for a partner in crime (I am not too keen on solo twitches thsse days). Hawky had been out bashing Rainham Marshes RSPB all morning and Shaun was also DIYing. Bugger. Back to the DIY myself. 45 minutes later, Shaun had cracked, and was on the phone. Not giving him the time to change his mind I said I'd pick him up in 15 minutes. And we were off.

Two hours and 10 minutes later, at around 3pm, after a very smooth journey we were pulling up at the nature reserve. A departing birding advised us that the bird was showing well on the south scrape, it was looking good. We hot footed it to the visitor's centre to pay our £4 entrance fee. I popped to the loo as Shaun sorted out the money. I rushed back to be greeted by Shaun, "It flew off 15 minutes ago, message just came through to the visitor's centre on the radio"....."ffs". We weren't the only ones to arrive just too too late. We decided to head to the south scrape and hope the bird would come back. On route, we met Dave, a birder I had chatted to on previous twitches and had seen the bird fly off. He suggested we head round to a hide on the other side of the reserve, where the bird had been seen in the morning. About 1.5 miles and 25 minutes later we were in the hide, the bird wasn't there. By this time another Greaterleg-less birder, John, had joined our group. We decided to head back round to the south scrape, via another 1.5 miles and 25 minutes frog march. John suggested he head off to check another site a few miles away where the bird had been seen previously and we carry on to the south scrape. As we departed we decided to exchange phone numbers and keep each other posted.

In the hide looking out at the south scrape it was obvious the bird was not there. After 10-15 minutes of scanning I dropped John a "no sign here" text, almost simmulataneously a text popped up " Found the bird! Call me for directions!" I advised everyone in the hide and we were off. I called John who gave us great directions. Three birders jumped into the back of my car and we zoomed off up the road. Ten minutes later we were speed walking to find John. He gave the thumbs up as we approached, the bird was asleep on the flash, c80 yards in front of us. After a few minutes it decided to play ball, woke up and provided great scope views. Phew. The walk back to the car was much more relaxed, with plenty of metaphorical back slaps etc. We dropped everyone back their cards, all shook hands on a good job done. Many thanks, particularly to birder John for the news. It's good to talk! 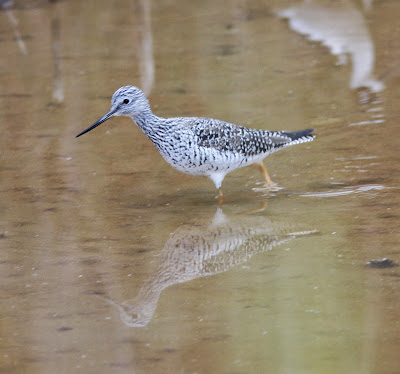 Not our bird but one on Sanibel Island, Florida (2013)
Posted by Martin Blow (martin.blow@rocketmail.com) at 12:11