2012 kicks off with a bang in north Norfolk

After a quiet Christmas mostly spent convalescing from my operation, and not seeing any short eared owls on my two visits to Rainham Marshes, what I really needed was to kick off my 2012 birding with a bang! And that I did. Sometimes things just seem to go right, and yesterday was one of those days. 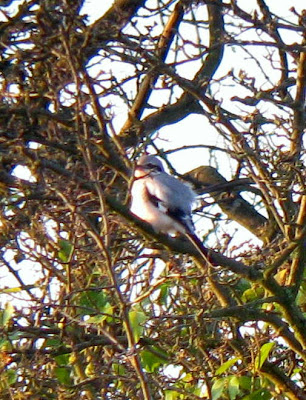 Myself, Hawky, filthy twitcher; Jono and Nick crammed into the Bradders-mobile and headed north. First stop around 2 hours later was Fakenham for a Great Grey Shrike that had been showing well for a good few days now. There had been some excitement when it was originally found as it was thought to be of the race, homeyeri, and therefore making it a rarer form of the Great Grey Shrike that is usually found on our shores each winter. After 45 minutes or so of freezing our bits off, the bird got out of its bed and decided to show itself. A very smart and pale bird it could be seen why some people thought it was of a different form, but, it now appears it is the commoner species after all. Anyway, who cares it was still very smart. Of note we also had double figures of Grey Partridge.

Next we headed to Cley for the now long staying mega Western Sandpiper. It was a month to the day since I had first seen it, and again this time it showed well although more distantly. A life tick for Nick too.

Salthouse was next for a sea watch and a warming coffee. Hot drink in hand we climbed the shingle back to view the sea. Before I was anywhere near the top Hawky began shoting that a Glaucous Gull was flying past. I ran to the top spilling my coffee all over my hand to view the brute heading along the beach. The bird then landed on the beach, with other gulls, about a mile away so we decided to try and get close to take a few snaps. Half way there a Snow Bunting popped over the bank and landed on the beach just a head of us, providing good but brief views. Unfortunately, a dog walker got to the gulls before us and put the birds up, landing on the sea. Another 10 minutes later and the Glauc was up and heading away up the coast.

Back to the car we decided to head west. Checking news, we were informed of 2 Black Brants at Wells and a Rough Legged Buzzard at the east end of Holkham. After 10 minutes we arrived at Wells to search through the Brents and Bradders quickly picked up a Pale Bellied Brent and one of the Brants. On we moved, and minutes later we picked up a large bird circling relatively close to the road. We quickly parked, jumped out to view the bird as unfortunately it slowly headed away. It was very pale and a had distinct dark tail bar; Rough Legged Buzzard. It was just too far for me to get a picture but check out Hawky's blog (link on the right) for one showing the key detail.

Back on the road we headed to Titchwell where we were all keen to try and see the also long staying Coues' Arctic Redpoll. This bird had been playing very hard to get on occasion, including the 2 hours that our mate Shaun had searched for it a couple of weeks earlier. Carrying on our run of luck on the day, we arrived on site to find a crowd of 30+ people crowded around the picnic area, all looking upwards. We joined the throng to find at least half a dozen or so Redpolls (of various form) feeding rather frenetically making picking out the arctic roll, not straight forward. After just 10 minutes or so it was finally nailed and soon gave up hiding away towards the back of the canopy and provided some good views. 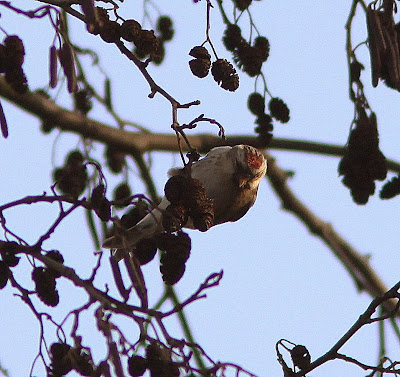 Happy we headed out onto the reserve. Of note we had 2 Scaup and managed cracking views of Spotted Redshank, before arriving at the beach for a sea watch. Here we managed to add Velvet and Common Scoter and Whooper Swan to a now bulging day list. With an hour of light left at most we had to decide on our final stop of the day. We plumped for Flitcham, we at dusk had Tree Sparrow.

It was a cracking way to start off 2012 with 90+ species recorded, including many scarce and rare species. Long may this quality of birding continue.

Posted by Martin Blow (martin.blow@rocketmail.com) at 09:19