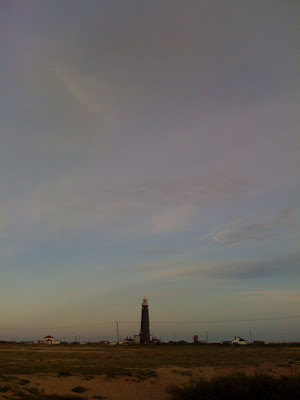 The news of a Bonellis Warbler being trapped and ringed in The Moat at Dungeness mid morning yesterday; had myself, Bradders Jnr and Shaun heading south straight from work hoping for a midweek tick (my and Shaun only).

By midday it was confirmed as a Western Bonellis, and it at 1.30pm it was reported again. Leaving Hornchurch at about 5pm we made good time arriving around 6.30pm. At first the news was positive with a departing birder stating the bird had shown just 10 ins earlier. We joined a small group of birders stood before a section of cover and it soon became apparent that it contained a number of Willow Warblers, but not a lot else. After 30 mins or so we decided we'd search the rest of The Moat. Despite us not finding a Bonellis Warbler we did enjoy a great supporting cast of 2 Black Redstarts, up to a dozen Wheatears, 2 Winchats and best of all 2 cracking male Redstarts.

With the light rapidly fading we bashed some bushed hoping to relocate the earlier reported Wryneck, but again no joy, so we headed off for a fish and chip supper, only to find that closed too!

Posted by Martin Blow (martin.blow@rocketmail.com) at 04:03