Hot on the heels of ticking the mega Slaty Backed Gull at Rainham Marshes on Wednesday, myself, Shaun and Hawky headed to Chipping Norton, Oxon, bright and early this morning hoping to add another mega to our lists, this time our quarry being the apparently long staying and recently refound Oriental Turtle Dove.

Arriving at about 7.30am we found ourselves at the end of a long queue (approx 200 yards), which started outside No 41 The Leys where for a few days now the bird had been frequently visiting the back garden. With the kind owner allowing birders in 10 at a time at the cost of £5pp (donated to the RSPB) we soon realised that unless the bird showed away from the garden we would be in for a potentially very long wait, in the rain. 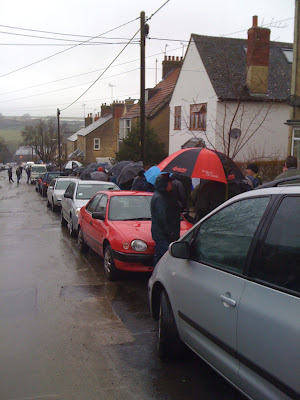 An hour or so in, and with no news from the front whether the bird had been seen or not, things were not looking good! Then from our left, across the road a bird appeared, Hawky called it immediately. Luckily it flew to the rear of No 41 and rather than settle out of site, it sat at the top of a large tree in the back garden. 200 birders jumped out of the queue and blocked the street all trying to view the bird between the houses. Everyone got onto it although not the best views were had. 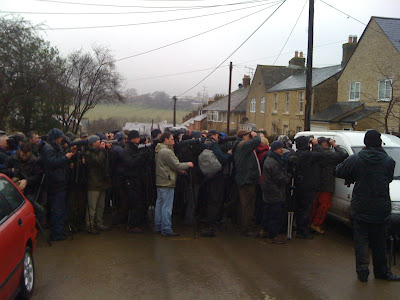 5 minutes later the bird flew to the lawn in the back garden of No 41 and the 1st 10 in the queue no doubt enjoyed cracking views. Just a few minutes later again it was off and appeared to make its way along the back gardens. Despite searching we couldn't re find it, however, someone else had, it had slipped past us to the other side of the road and was showing in a tree at the back of a private field. This time I was much nearer the front which was just as well as the viewing area was small. I had a quick peek at the bird through someones scope this time providing much better views of the smart bird. With desperate birders climbing fences and generally not behaving, I thought it best to move away.

Shaun, Hawky and I celebrated with high fives, and a cup of tea and slice of home made cake, being sold by some girls living in the street rather entrepreneurially (is that a word?) raising money for charity!

Two amazing bird in 4 days! Long may this run continue!

Posted by Martin Blow (martin.blow@rocketmail.com) at 08:36