It doesn't much better than this! This morning I dropped Jamie off at his scouts camp in Elm Park, about a mile and a half from home, as he is away for another weekend  away with then. I parked around the corner, packed him off an returned to the car. I started the ignition and was about to head off when, right in front of me, in an apple tree in a back garden, a single Waxwing. Turning off the car. I jumped out and noticed a man, the resident of the house, leaning out of his bedroom window.

"Waxwing", I mouthed and pointed
"Sorry?", the man said, cupping his ear
"A Waxwing, in the tree" I said
"I'll come down" he said.

And come down he did. I was invited in, where we stood in the garden for 15-20 minutes, admiring the Waxwing, talking about birds, no more the 8 feet from the bird, which was continuously feeding on some of the biggest apples I have ever seen! Also present a male Blackcap. 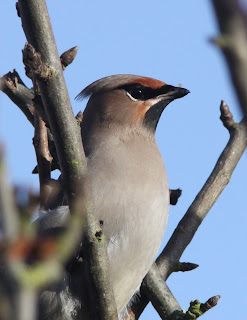 I had no camera or binoculars, but luckily the man kindly said  could come back later. I popped home, had a bite of lunch and went back. The bird was still there but unfortunately the man wasn't. I popped into the garden for a few minutes and got a few shots, but the bird had moved from the closest apple out in the open to a more obscured fruit. I rattled off a few shots and left. 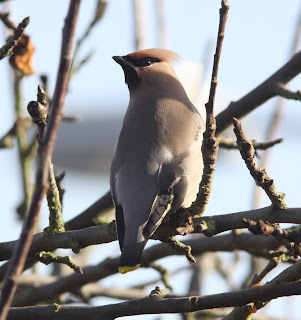 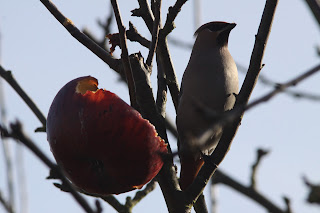 The apples really were the size of grapefruits!

Later, I went back again with Shaun. This time the man was in, but the bird had gone. We had a quick drive round other local sites, Berwick Reservoir where the Ross' Goose was still present and a Buzzard overhead; passed a frozen Berwick Pond (I'll check that out for Bittern tomorrow). No sign of Little Owl at any of the not-so regular sites, onto Stubbers where there were hardly any birds on the water but many Fieldfare and Mistle Thrush, and another Buzzard perched in a tree. Ad that was that. Had planned no birding today, and have thoroughly enjoyed finding the Waxwing and  being invited into the garden etc. I'll check it again tomorrow.
Posted by Martin Blow (martin.blow@rocketmail.com) at 08:30