Back in the summer when we booked a weekend away in early December in north Norfolk for my daughter's 14th birthday, little did I think at the time I'd be jamming in on a mega rarity. This is the 3rd time this year I have been back to the cottage, in Thornham. The first time involved a week away over Easter, and tickwise it went horribly wrong. During that one week I missed out on 2 life ticks elsewhere; Little Crake and Black Stork; 2 birds I have yet to catch up with.

So last Thursday when the Semi-P that had been present for a few days at Cley, firstly changed from a Semi-P to a poss Western, then onto a definite Western Sandpiper, I was thanking Jammyious Dodgerus (the Roman god of, er, jamming in on birds), that the little yank would hang on for at least 12 hours so I could get there.
At 7.30am Friday I arrived at Cley in twighlight, and walked the short distance to the hides. There was probably 50 or so birders already there spread quite evenly between the 3 hides and luckily, the bird was on show in front of the hide i opted for first, feeding frenetically, with Dunlin. In poor light it was not easy to get any photos as you will see. There I was Sibley in one hand trying to pick out the key featues to confirm why it was a Western and not Semi-P when a Merlin shot through, putting everything up. The small group of Dunlin (and the sandpiper) relocated on a small island much further away and directly under the sun, which was now just above the horizon. Everyone started chatting as is the way and no one noticed a small flock of waders flying low past to the next pool. Well everyone but me that is, as I was Billy no mates that morning, I was actually checking out the teal to try and locate the one with the vetical stripe to grip off Hawky, so followed the birds and relocated the Western Sand. Off I went to the next hide to get a better view, unfortunately, this hide was much more packed, especially after the bird had just flown in. So after cranning my neck for a further 10 minutes I decided to call it quits and head home, for a well deserved fry up! Tick and run! 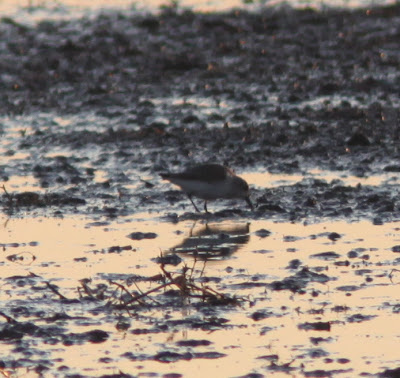 The weekend didn't produce any other suprises birdwise. One trip to Titchwell failed to produce the Yellow Browed Warbler. I picked up a Tawny Owl beside the road on the way up and late afternoon on Friday, a Barn Owl provided cracking views for the family, as it hunted close to the road. Oh and of course thousands and thousands of Pink Feet provided the usual daily spectacle. 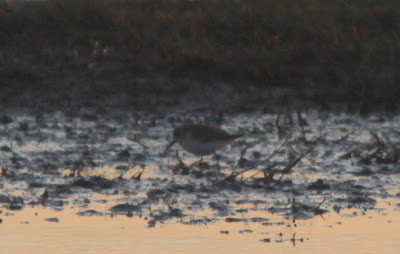 Posted by Martin Blow (martin.blow@rocketmail.com) at 04:12