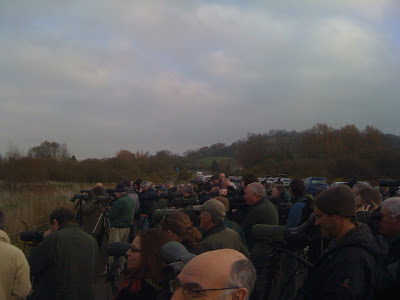 Wow what a morning! With me and Bradders Jnr still needing Sharp Tailed Sandpiper we couldn't resist the lure of the 1st juv of this species since 1975. With Bradders needing to be back by 2pm we set off early to get to Blagdon Reservoir, Somerset, for 1st light. We were joined by big listers John Archer and Rich Bonser, who had between them seen more Sharp Taileds than I had ha hot dinners, but they had not seen a juv in this country.

We arrived at Blagdon at around 7.45am ( journey approx 2.5 hours) to be told there was no sign. Bugger. There were around 30 - 40 birders on site already, so we had a quick look around from the car park, bagging Red Crested Pochard, Long Tailed Duck and Goosander, before deciding to head to the other end of the reservoir to refind our sandpiper! Unfortunately, that didn't happen, but Bradders quickly found the Ring Necked Duck and John a Ring Billed Gull, and there were 8 Bewick Swans too! All amounting to a strong supporting cast, but where was the headline act!

It was now 9am, we had about an hour before we had to start thinking about heading home. Bradders and I headed back to the car, as John and Rich headed off in the opposite direction to try and get better views of the Ring Billed Gull. 10 minutes later we were in the car when the pager bleeped: SHARP TAILED SANDPIPER - CHEW VALLEY RESERVOIR!!

The tyres screeched as we zoomed up the winding lane trying to find the others. 2 minutes later we were all in the car, doing a u-turn and heading the short distance (2-3 miles max) to Chew Valley.

We pulled up to find out it had just a few moments earlier flown out of sight. A adult Spotted Sandpiper had also been there until a few minutes earlier but had also just flown. Nooooo. More and more people began to arrive to swell the numbers to over 100. Another 30 minutes passed and still it had not been relocated. Then, "There it is!" said someone, direction were shouted 1 or 2 people got onto it. I managed a fleeting glimpse though someone else's scope before it walked out of sight again. Aaargh. And Bradders and John had not seen it yet! A few minutes later a small flock of Dunlin wheeled into sight and plonked themselves down out in the open, and there it was, in amongst them, providing much better, and longer views. Phew. 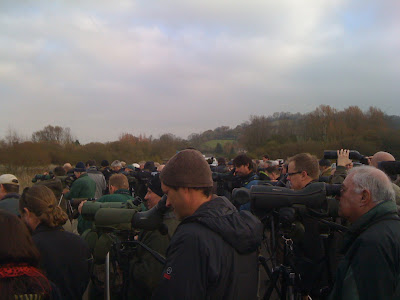 Posted by Martin Blow (martin.blow@rocketmail.com) at 06:38