Who needs an unreliant robin, when you can have a Roller! 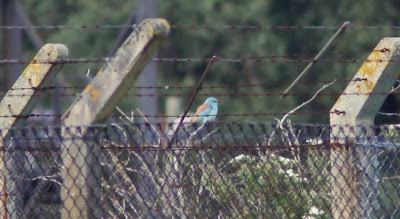 Ok, ok, the photo is crap, but we had great scope views of this cracking adult Roller last night!

There could not have been a much better bird than a stunning adult European Roller, to help me, and no doubt one or two others, get over it all going a little bit pear shaped with the robin last week.

However, for a while it looked like this wasn’t going to happen either. Around 12.00pm news breaks of a possible Roller, at Hollesley in Suffolk. Thirty minutes later, a possible becomes a definite. Yes! Then all of sudden if dawned on me, that that night of all nights, I had an evening meeting at work, and I was chairing it! No! An escape plan that Steve McQueen on a motorbike, carrying a pummel horse, would have been proud of, needed to be hatched, and quickly.

An email from Bradders Jnr. stated he’d be ready to leave from 5pm. Shaun was working in Burnham on Crouch, so it made sense for him to go straight from there, although he had no bins, scope of camera on him, Hawky was working in an area with no mobile signal and Jono, well Jono, was cursing as it was just one of those days when he couldn’t get away. Being philosophical about it, you can’t win ‘em all and with Audouin's Gull and Blue Cheeked Bee eater on his list from birds staying nearer 1 hour than 1 day, he couldn’t complain too much.

First I called my colleague Gary to ask if he would chair the meeting. I know he would, he’s top bloke, but it was my boss I really needed to convince. Over the years I have been quiet open with my boss about my birding and twitching escapades. I don’t want to get into lying to leave early or phoning in sick to go on a twitch, because a) it’s wrong and b) more importantly he’d know as every major twitch now gets in the national press etc. Anyway, to cut a long story short, he knows how passionate I am about it and agreed that he and Gary would cover the meeting and I could leave early. Phew!

Hawky then responded to the text asking him to call me urgently and a plan swung into action. We’d meet in our usual spot on the A12 by the M25 at 5.30pm, via Shaun’s house to pick up his bins etc.

Now don’t get me wrong, most twitches are exciting; will it still be there? will it be taken by Sparrowhawk 5 minutes before we get there? Or more likely, will some dick head photographer try to get within 2 feet of it with his 500mm lens and flush it! But this was a Roller, a full adult, superb, multi coloured Roller. Possibly my no 1 most wanted bird. Ok it’s not a first for Britain, it wasn’t even mega alerted (being over 300 British records) but it is right up there with the very best.

We took our last left hand turn and could see the long line of parked/ditched cars along the road. Shaun and Dick, and Gavin, were all smiles as they pointed out the turquoise blob around 150 metres away on MOD land. Over the next 2 hours we enjoyed some cracking perched and flight views when it hawked insects occasionally landing on the fence.

About 9.00pm we headed off for lovely fish and chips in Woodbridge, where a large male Stag Beetle swooped down over our heads before landing on the front of a house on the other side of the road, providing good views.

Arriving home at 10.45pm, I showed Julia some pics on the internet of the bird, and even she was impressed, saying she may have come along if she knew it was going to look like that!

Finally, it was good to chat to the birder who turned up in his suit from central London, who successfully twitched via train to Ipswich and then taxi to the bird, where even his driver enjoyed the scope views!

I’ll be surprised if I see a better bird this year, or in fact, any year.
Posted by Martin Blow (martin.blow@rocketmail.com) at 04:27