Adding Cory's Shearwater to my UK list - Norfolk in chance 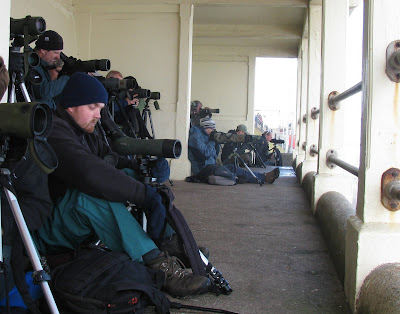 I've seen quite a few Cory's Shearwaters. It was a number of years ago on a whale watching trip in the Bay of Biscay, but I've never really come close to adding one to my British list. So when Mr BBC weatherforecasterman informed me that on Monday there would be gale force northerly winds battering the north Norfolk coast, I thought I would have a good chance of adding the large shearwater to my list. 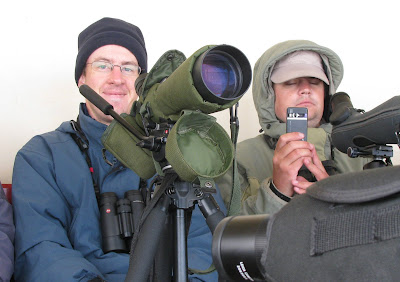 "Wake me up when something happens"

"Wake me up when something happens"I was not the only person who had this thought. I made the 2.5 hours journey alone arriving at Sheringham at 7.00am to find the shelters packed to the rafters with Cory hungry birders, including fellow Essex birders; Messers Bradders Jnr and Jono "The Leth" Lethbridge. With the skies grey and the waves smashing in against the shore, things looked very promising. It didn't take long to add shearwaters to the day list with both Sooty and Manxs passing through west. Unfortunately the constant steam of Arctic and Great Skuas were not interrupted by any Long Tailed or Poms though. Good views were had of a relatively close Storm Petrel, which got the Norfolk birders excited, being a tough bird to catch up with in the county.

As we reached late morning, the skies began to clear, the grey clouds replaced with blue skies. Birders started to drifting off (to sleep) Coryless. The pager was quiet so I decided to head home early and bag a few brownie points rather than hang about and bash a few bushes or twitch a juvy type Red Backed Shrike or two but with hopeful a good autumn about to kick off I'll save that for another day soon, hopefully. As for Corys, there's always next year!

Posted by Martin Blow (martin.blow@rocketmail.com) at 01:42