Another after work twitch saw Hawky, Shaun and myself fight our way though the rush hour traffic leaving London/Essex for north east Norfolk. The slow journey was brightened up at Thetford when Shaun spotted a large raptor from the back seat as we sat in a traffic jam. A few seconds later a large female Goshawk drifted into view, circling over the road. There it remained for 30 seconds or so. Unfortunately none of us had our cameras ready for action. 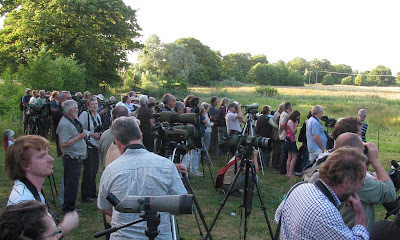 An hour or so later we arrived on site, suprised to see so many birders already there. The bird could be heard from the car parking area singing loudly buried deep in undergrowth. It continued singing, but not showing for 30 minutes or so before it suddenly stopped. An hour or so later Shaun and I caught glimpse of a warbler as it appeared through the thicket to the right, stopped for about 2 seconds, before flying roughly in the direction where the River Warbler had previously been singing. Coincidence or nor, 2 minutes later the singing started again from the same spot as before. Again it did not show from the spot. It was now 9pm and we were starting to worry it may not be our night. All of a sudden the larger group all looked left to the reeded area as the bird had obvioulsy flown from its hiding place. The singing then became much more constant although we still could not see the bird.

A few birders were looking very intently through their scopes at the front of the throng, pointing and seemed to be giving hushed directions to the those directly around them. After 5 minutes we began to wonder if they could see the bird?

Me - "Excuse me mate, have you got the bird in your scope?"
Git - "Yes"
Me - under my breathe - "for bleeps sake thanks for telling everyone "
Me - "Can you tell us where it is then, please" 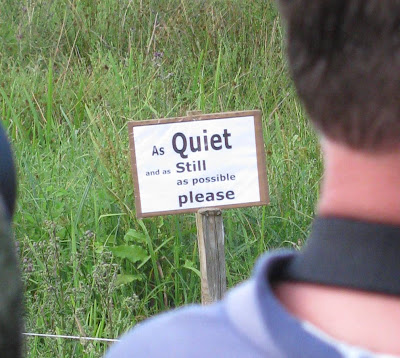 I think a few people took this notice a little too literally.

With 98% of the birders there not seeing it and then light fading badly, a mini panic started with everyone looking through the scopes of the very few that had got on to it from the sketchy directions given. Eventually with the light beating us I think everyone got onto it. By it, I mean a brown blob singing loudly. Life tick (#372). The evening was rounded off with both Barn and Tawny Owls hunting in the field behind the still singing River Warbler.

A note to all birders/twitchers:
IF YOU ARE AT A TWITCH, AND YOU HAVE THE BIRD IN YOUR SCOPE, HERE'S AN IDEA, HOW ABOUT TELLING EVERYONE ELSE WHERE IT IS. DON'T BE A TW*T AND KEEP IT TO YOURSELF.


Posted by Martin Blow (martin.blow@rocketmail.com) at 05:53