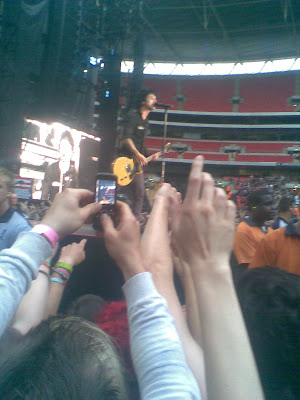 Ok so the photos are not the greatest. Taken on my mate Phil's camera phone that he had borrowed from Noah ( out of the ark - come on, keep up) They show you how close to the stage we were at Wembley Stadium last weekend when seeing GreenDay. 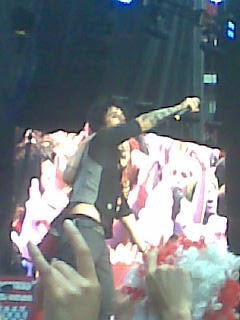 I jammed in on a ticket the day before the concert when Phil emailed to say he had a spare. Having seen GreenDay at Wembley Arena last year I jumped at the chance as they certainly put on a great show, plus having not yet been to the new Wembley Stadium as I am waiting for West Ham United to reach a major final, yeh I know, it's going to be a long wait..... it was a good opportunity to see the new stadium.
About an hour before the main act was due to take the stage we went for another beer and found ourselves at the entrance to the "Golden Circle"; a section right in front of the stage.
If you don't ask, you don't get.
I asked the steward at the entrance how people had got in and they informed us that it was for competition winners, fan club members and the first 3000 few the doors on the day. Apparently people had been sleeping on the steps outside overnight to secure their spot.
"Ok, fair enough" I said "I suppose they deserve it". A quick look around to maker sure no one was ear wigging and the steward whispered to me "don't tell anyone I told you, but they are about to release 150 more spaces so wait here and you might be lucky".
Wait we did and 10 minutes later sure enough we were having wrist bands put on and ushered into the Golden Circle. Superb! As you can see we were just feet from the stage, with around 80,000 people behind us.

Posted by Martin Blow (martin.blow@rocketmail.com) at 04:42