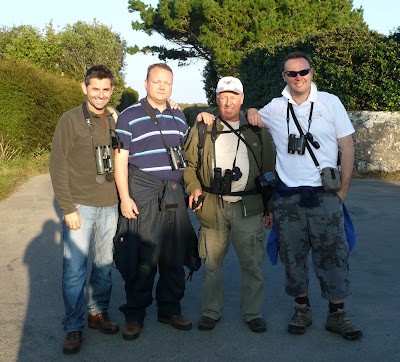 left to right: Shaun, Hawky, Dave Mo and me (Monkey)
For the third year in a row I found myself on Scilly in October, this time accompanied by Shaun, Hawky (our self appointed group leader) and Dave Mo.
Day One - we left Essex at 9.00pm on Wednesday 14th, picking Hawky up in Barking before heading through London to the M3. We decided not to take the easier M4/M5 route this time round, which turned out to be a mistake. With the A30 closed somewhere in Dorset we had to make a significant detour towards Bath to enable us to get back on track, adding well over an hour to an already very tiring journey. Somewhere along the route we had 2 Badgers feeding along side the road which was a life tick for Shaun. Hawky and Dave Mo slept most of the way leaving me and Shaun to chauffeur them to Penzance. We eventually arrived at the 24 Tesco in Penzance at around 4.45am, where me and Shaun managed to grab an hour and a half's sleep before we headed to McDonalds for breakfast.
We arrived at the airfield at Lands End around 8am for our 8.50am take off. The flight was smooth and 15 minutes later we were on St Mary's. We jumped into the waiting bus to be robbed of £6.50 per person (£26 for a trip that would have been £5 in a taxi back home) for a journey of less than a mile, off loading our bags at the small family run Haycocks B&B in Hugh Town, before heading to the harbour to get the boat to St Martins, to try and see the Raddes Warbler and Little Bunting that had been reported there over the previous few days. Not to be outdone by the airport bus the boat prices have risen again to £7.60 a trip.
Both birds had been reported at Arthur's Farm on St Martin, at the other end of the island. We took a slow walk, checking every field and hedge, adding Black Redstart to the trip list before news arrived that a Minke Whale was feeding a quarter of a mile off sure. We had good scope views for 20 to 30 minutes and a Peregrine Falcon flew over head.
We made our way down to the farm where a good 40 - 50 birders could be seen. There had been no sign of the Raddes Warbler for a number of hours but the Little Bunting had been showing intermittently. We didn't have to wait long for great views of the Little Bunting but the Raddes Warbler never showed. We headed back towards the harbour adding Common Redstart, Grey Wagtail to the list before arriving back at St Marys mid afternoon. We also had brief flight views over of possible Jack Snipe and Ring Ouzel. 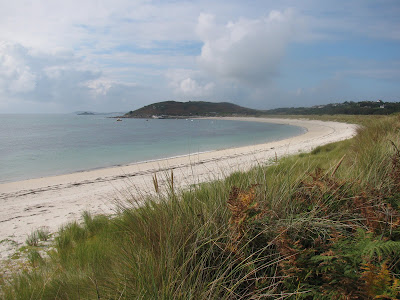 We then headed up towards Penninis Head where a Common Rosefinch had been reported. Wheatears and Meadow Pipits were scanned hoping to be turned into something rarer until we spotted a large flock of Greenfinch in the first field off the head land. We scanned them hoping to find the Common Rosefinch in amongst them and we did! Hawky had it in his scope and managed to get us all on to it (life tick for Dave Mo) before the flock took flight and it could not be relocated much to the disappointment of those turning up to see it after we put out news. They included our fellow Essex birders H, dirty year listers; Bradders Junior and Jonathon Lethbridge, Sam Shippey, Sir Les Harrison of the Garrison and Bradders Senior. They had however been getting good views of Wryneck just below the turning circle on the airfield. With it now past 6pm and the light starting to fade we decided to leave the Wryneck for the following day and go and get a couple of well deserved beers and some sleep. 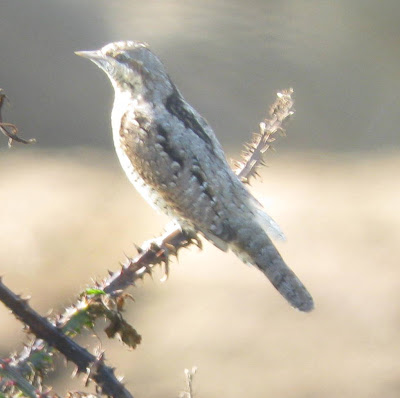 Day 2 - Today we stayed on St Marys and started off going for the Wryneck. We all had cracking views of the bird allowing some decent digi-scoped shots. When this bird showed, it showed very well but it did have a tendency to disappear for hours at a time. Today we struck lucky however.
We continued around the coast to Porthhelic where Jack Snipe showed well in front of the hide. There was also 7 Whooper Swans. Two Firecrests were in the large pine behind the hide.
Further along through lower moors we headed up towards Longstones for some lunch before birding the fields at that end of the island in the afternoon in the vain hope of tracking down the very tricky Red Throated Pipit. Redpoll called overhead on route. Just along the track from Longstones Cafe a Raddes Warbler had been seen early morning but not since. We caught up with some of the other lads who had just had the Red Throated Pipit over, heard only, we missed it by 15 minutes. After a very large (and expensive) cream tea we birded the fields and trees around and up to Newford Duckpond, when news came through that the Raddes Warbler had been relocated and was showing well. Just 10 minutes walk away it would be rude not to go and see it. There was already 30 to 40 birders at the site with most already having had good views they were leaving allowing us to get prime spots. 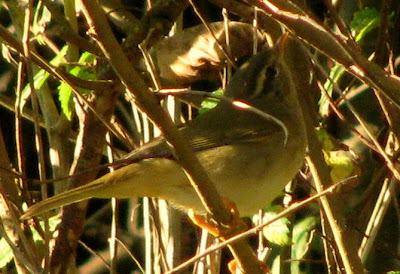 We sat down and kept quiet. The bird showed amazingly well down to less than 10 feet, too close to digi-scope but I still managed a few snaps on my digital camera. 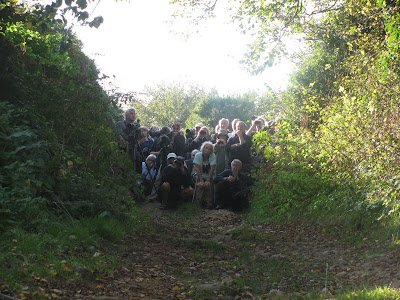 It seemed like we had walked a lot of miles today so we headed back for dinner at The Bishop and Wolf. Great value and very good food. It was Bradders Jnr's birthday so we all got together for a few beers.
Day 3 - Hawky, Shaun and I headed to St Agnes. An R B Fly had been showing well in The Parsonage as well as a Pied Fly and a Yellow Browed Warbler. A quick stop at The Garrison didn't turn up the Yellow Browed Warbler earlier reported there but allowed us scoped views of 4 Spoonbill on Samson.
It started well on St Agnes with a Ring Ouzel after 10 minutes. Unfortunately there were no flycatchers at The Parsonage but we did turn up a couple of Firecrests in with the many Chiffchaffs. 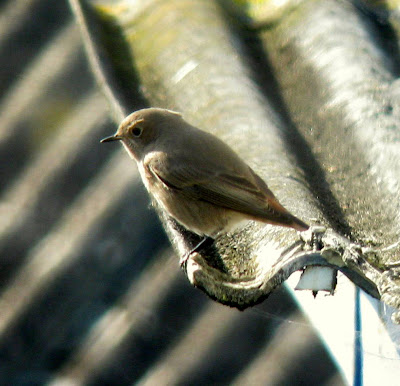 A showy Black Redstart allowed a few snaps, before we headed out to try and locate the reported juvenile Rose Coloured Starling. Despite covering a lot of ground and checking every field all we turned up was 2 Peregrine over. With only about an hour remaining until our boat back it had not been a great day. Continuing to check every field we lucky to have a Wryneck fly across one and disappear into the bushes, pleased with that, news came over the CB that the Rose Coloured Starling had been located at Troy Town Farm. A brisk 10 minute walk and we were in the area. We split up each checking a field and within a minute Shaun had located it. With time running out we managed a few digi-scoped shots in the 5 minutes it remained in the field before heading off back to the boat. 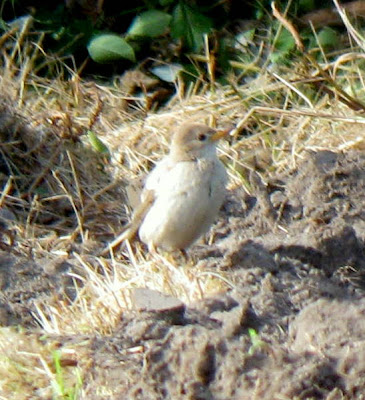 Dave Mo who had remained on St Marys called to say he had seen the Stick Insects at Old Town church Yard so myself and Hawky headed up for a look, via the Common Rosefinch which was just a 100 yards or so away from them. Superb fish and chips was followed by an early night. 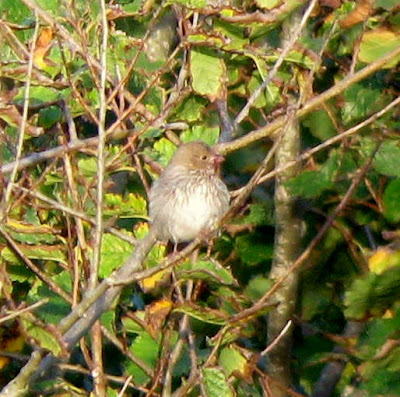 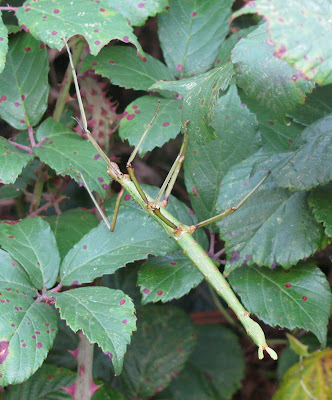 Day 4 - Shaun and I decided to stay on St Marys on our last full day. Hawky and Dave Mo ended up on St Agnes again after missing the early boat to Bryer. First stop was again the Common Rosefinch which showed well in the weedy field at Carn Gwarvel, followed by another look at the stick insects.
We were sure the airfield would turn something up today as there we no flights being a Sunday so we made our way up to the turning circle via further great views of the Wryneck. 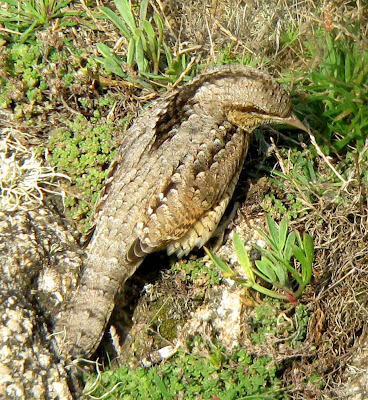 As we got onto the airfield news came on the CB of a Minke Whale feeding just off Pennines Head. We watched the whale feed for almost half an hour before fishing boats got too close and off it went. At one point it must have been just 100 yards off shore. 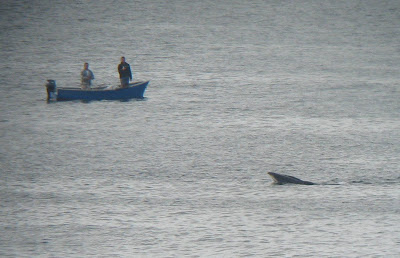 The airfield was quiet so we headed off back to the B&B for a cup of tea before deciding on what to do next. Back at the B&B news came through of a Cattle Egret at Telegraph, a good 20 to 30 minute up hill walk. This is when operation Golf Cart came into action. Mark at the B&B had told us that morning that they had a golf cart that should we want to borrow it we could. So that we did. We picked up the cart and zoomed up towards Telegraph passing many bemused birders on the way, to just catch the egret in flight. The bird then gave many birders the run around over the next few hours but we managed to catch up with it on 4 or 5 occasions in the birdmobile. 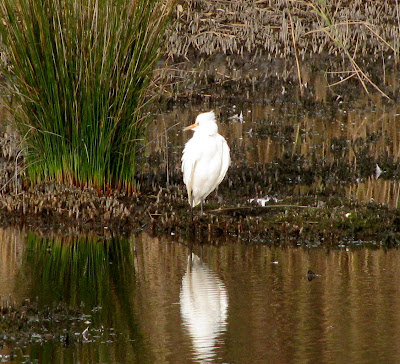 We spent the next 2 hours intensively birding the fields between Telegraph and Lower Moors. checking every field, but the best we could find was a Common Redstart.
We decided to again get onto the airfield. As we walked up to windsock we were told via the CB that a Richards Pipit was showing just 200 yards away, we were the 2nd and 3rd birders on the scene and after it initially disappeared for 15 minutes or so we had good but relatively distant views. 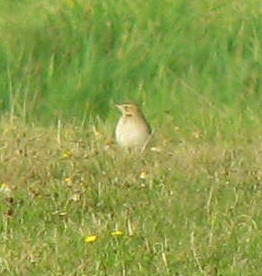 We spent our last night back in The Bishop and Wolf for a fantastic carvery.
Day 5 - We had the 1st flight off and were back on the mainland by 9.15am. With nothing much about in Cornwall or anywhere else in south west England we headed home.
2009 was a funny year on Scilly. There were no megas, no yanky warblers. We didn't even see a Yellow Browed, or Pied or an R B Fly but we still had a fantastic time. Scilly is a magical place where anything could happen. Just look at the previous October records. Hopefully we'll be back next year.
Other:
1. Big thanks to Mark and Sarah at the Haycocks B&B. We all agreed we would highly recommend it. The golf cart was an added bonus.
2. Recommended - The Bishop and Wolf - also run by Mark and Sarah. Great food at value for money prices.

Posted by Martin Blow (martin.blow@rocketmail.com) at 04:16